This is the second year I’ve been co-leading a Daisy Troop for The Princess.  The first year was really just a warm up.  We had about 8 kindergarten girls and we meet once a month.  This year we have a full troop of 12 girls and are ready to rock and roll.

We are starting out the year with the Respect Authority Badge.  Back to school back to the rules of the classroom.

The meeting began by getting our wiggles out with a game of Simon Says.  Our ‘Simon’ got to wear a fire hat! The girls took turns ‘respecting the authority’ who was actually another Daisy Scout.  This let the girls have a chance to be the person in charge for a change.

After our warm up, it was our circle/snack time.  We read the story from our Daisy guide book and the girls made a list of people who are authority figures.  We also discussed the difference between a person who actually has authority and person who is simply being bossy.  Meaning that in America we choose our authority figures and vote on who will be President or Sheriff.  So we are actually giving them the authority and then respecting the rules they make to keep us safe.

For our craft, we made gavel pencils.  I looked all over pinterest for a good craft, but really couldn’t find anything.  So I made one up…

Before the meeting, my co-leader and I hollowed out a small whole in a wine cork.  The girls pushed the eraser end of the pencil into the cork.

Next, we allowed them to decorate their gavel with some washi tape I purchased at the dollar store.  And, ta da….  we have our very own Daisy gavels.  I thought this would be easier on adult ears than buying wooden ones online!  I also bought flower themed notebooks for the girls to go with their new pencils.

The final craft of the day was making a wanted poster for someone who did not respect authority….

Then it was time to give the Daisy’s their badges and call it a day.  By the way, I did find a template for the Daisy Petal Card on pinterest.  We have had a few girls with misplaced petals and I am hoping these big certificates will avoid any more missing petals!

When mom volunteers to help decorate the school for the new school year, the kids get recruited to help. Thankfully, my kids love arts and crafts so it was an easy sell. 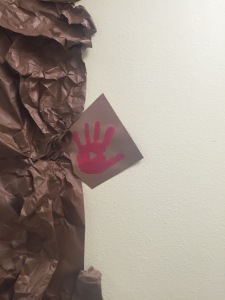 Our school’s theme is Timeless Journeys. So we attempted to make each section of the school represent a different time period.  We move all the way from the cavemen to the boundless future ….

The first time period is the pre-historic. We decided to make a cave in the hallway. Some of the moms did the cave walls, while the kids and I worked on a few ‘cave man’ hand prints.

The next stop on our journey through time is Ancient Greece.

Once again, I put the kids to work making a few columns.

We decided on two different styles…

A broken pillar and one still intact.  We also didn’t paint them—originally in Ancient Greece they would have been brightly colored.  But, it’s a big school and we had to keep moving to get our decorating finished!

Next up is life in the Middle Ages.

The kids and I began making a few things at home so it would move faster when it came to decorating the actual hallways.  We started with a few accent pieces for the Middle Ages hallway.

My first try at making torches was a little rough. I took old grocery bags and rolled them into cones and stuffed them with tissue paper ‘flames’. I didn’t love my first attempt and the comments from The Princess didn’t help. She declared they looked like flowers!

Cinco came to my rescue when he told me we needed to crumple the flames up and not allow them to fan out.  It was a good point and the final torches looked pretty good.

The next step was to crate a few larger more distinguished pieces.  We decided on ‘stained glass windows’.

Then it was time to skip ahead to the colonial period!  I have to give credit to another amazing mom who made a very cool looking Mayflower.

Next up was the Wild West, which I sadly didn’t photograph.

Then I put the kids to work again!  This time we made the Berlin Wall.  Instead of traditional graffiti, we wrote famous Cold War quotes on the wall. 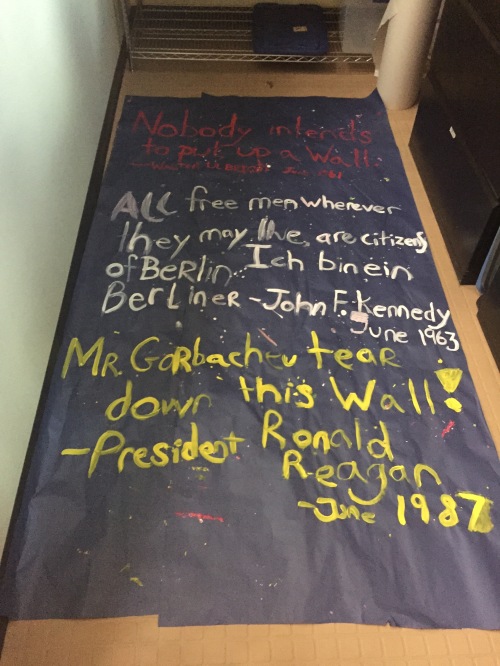