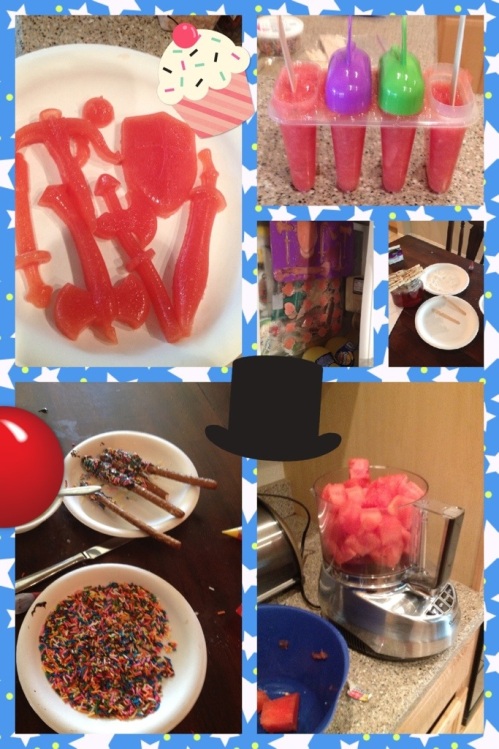 The Princess loves the story of Charlie and the Chocolate Factory. She even wants to open her open candy factory and candy shop when she grows up! Last summer we had a Willy Wonka day for mom camp and we brought it back this year by special request.

We decided to make a number of candy treats. A lot of them were watermelon based. I mean, a watermelon is pretty big so you can use it over and over. 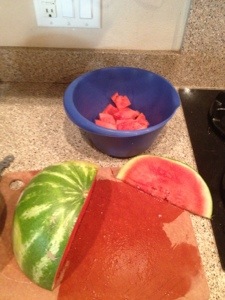 We started with frozen watermelon popsicle. I chopped up some watermelon cubes and dumped them into the good old Cuisinart. The Princess of course got to press the start button. Round and round it went until it was mushed up to a thin pulp. We poured it straight into the popsicle molds and promptly placed it in the freezer. When we tasted them a few hours later, they were slightly watery and not really all that sweet, I think I should have added some sugar and maybe boiled down the watermelon juice. But, the kids liked it so that’s really all that matters.

For last year’s Wonka Day, we made our own chocolate from a kit I purchased online. This year, I skipped the chocolate kit and went for melted chocolate chips. Then I purchased some molds. As you know, Cinco loves Star Wars. (See Mom Camp Days: 14, 15, and 16). So, I decided to buy some Star Wars molds: Han Solo in Carbonite!

Last year we used the chocolate from the kit to cover some pretzels. I LOVE chocolate covered pretzels. We had a rose mold from last year that we used for the pretzels again.

And, I also purchased a princess pretzel mold for this year’s project. The Princess picked them out on Amazon herself.

This year in addition to the molds, we rolled the pretzel sticks in chocolate and sprinkles, too! This was a little easier for the kids.

There were also a few candy projects that just never panned out. We attempted to make rock candy. But the sugar crystals never formed, even after waiting almost a week. I even pre-treated the sticks!!!
Our sad little, science experiment just sat there…

The second candy project that just didn’t taste right were make your own healthy gummies. I used the recipe at Sweet Little Peanut. And, I give them credit for trying to find a healthy option.  But, I think the taste of the sugar substitute just ruined the gummy. I guess you have to go with good old corn syrup to get the sugary flavor. So much for making a healthy version.  Sometimes you just have to go with the real thing to make it worth the calories.  Thankfully, I almost NEVER eat gummies, so it’s not a big deal for me.   I will say, the gummies we make LOOKED GREAT!  I had this cute little mold I found in the dollar section and target and we poured the liquid into it.  Adorable.

With all that treat creation out-of-the-way, it was time for a few activities. There was a lot of time dedicated to:

And of course, they day would not be complete without watching the Wonka movie.

I am personally a fan of the original. The Johny Depp version is just too creepy for little kids. Plus, it doesn’t have the singing Umpa-Lumpas. It’s not Wonka without an Umpa-Lumpa!