Today was the day the Captain joined us in London! Of course, his flight didn’t arrive until the afternoon so there was the opportunity for some quick touring before his arrival. 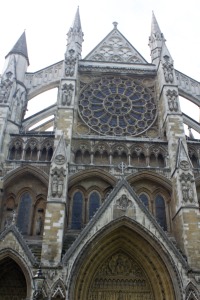 It was off to see Westminster Abbey! Yet again, The Princess was digging the Abbey and Cinco was ready to had to pretty quick.

The Abbey provided a children’s scavenger hunt which lead the kids around the place and kept them engaged. However, a few of questions could only be answered by listening to the audio guide. That was something of a challenge as the kids were going through the Abbey pretty quickly.

I did get the opportunity to see a few of the royal from the Plantagenets. But, the tomb of Edward the Confessor was closed because it is so old and delicate.

The Princess was dead set on seeing the tombs of Queen Elizabeth I and Mary Queen of Scotts! She also loved The Chapter House.

The Abbey offered a prize when the scavenger hunt was over– a chocolate gold coin. Both Queen Gram and I figured it would be a small coin. Oh no! They received a giant chocolate coin and promptly ate all of it!

Then it was back to the flat to wait for The Captain’s arrival!!! The kids were understandable excited to see their dad.

He said he wanted to check out The British Museum. So we made a second tour of the place. We saw a few of the Egyptian items this time and I got to see some of the carvings from the Tomb of Halicarnassus, one of the 7 Wonders of the Ancient world! But, mainly Cinco wanted to show The Captain all things he saw on his visit. He was very excited to show his dad all the items he liked and I thought it was rather adorable.

Cinco also managed to hold off spending his money so he did get the mini Lewis Chessmen set!!!