Day 19 was all about the lobsters.

We hitched a ride on a lobster boat and learned about the lovely crustasian and caught a few while we were at it.  The morning was incredibly gray and foggy, just what you would expect for lobster boating!

On the journey, we baited the traps, held the lobsters, learned to put the rubber bands on them to keep them from pinching and, lowered the traps back into the water.

We even brought up a few ocean friends who weren’t lobsters, including a star fish and a crab.

The best was watching the sea gulls swarm the boat when we emptied the old bait out of the traps.  Nothing tastier than 3 day old, soggy fish!  One of the gulls even pecked at The Captain’s hand when he was resting it on the top of the boat.

For lunch it was more seafood, I had fried clams which I haven’t had in years!

In the afternoon, it was time to learn about lobsters… The kids both did lobster worksheets and draw their own pictures of lobster boats.

Dinner was back near the ocean in a lovely stop where we had a good old New England Clam Bake! 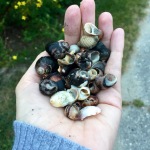 The kids and I explored the sandy beach searching for shells — The Princess’ favorite beach pastime.

The food was great especially the chowder!  I was stuffed by the end of the night.