We took a stroll from our hotel to the National WWII Museum. Why the museum is in New Orleans and not Washington, DC is beyond me.  But after its founding, it was officially sanctioned by Congress as the National WWII museum.

It was such an engaging museum that even The Captain had a good time– and, he is notoriously difficult to please!

The family took advantage of a special interactive submarine exhibit called The Final Mission.  Each guest is given an identity and an assignment on board a sub.  The Captain and Cinco were in charge of loading and launching the torpedos.  The Princess and I were tracking targets.  (Pretty good assignments in my opinion.)

The facility was also wall to wall with retired equipment: bomber & fighter planes, artillery & tanks, and uniforms galore.  The museum makes use of many short oral histories to make the war more personal and focuses on major battles that were turning points in the war.

Hands on elements included a post where you could inspect a medic’s equipment and take an up close look at a German Officer’s get up— right down to the small gun cleaning tool kit he would have brought to the front with him. Guests were encouraged to try on costumes and pose as posters–  like the unforgettable Rosey the Reviter. 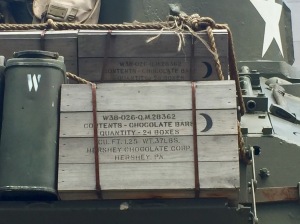 And, each guest is issued a Dog Tag registered to a solider. Randomly, I got actor Jimmy Stewart. I assumed he spent the war in Hollywood making movies.  Instead, Stewart enlisted as a private and worked his way up earning wartime promotions. He flew planes in the Europen Field.

I’d been to NOLA twice before, I’d never seen the famous Garden District and decided this visit I needed to make that happen. After lunch, we walked around the area looked at the houses and snuck a peak in the cemetery.  I didn’t do enough pre-search to realize the only way into the cemeteries is with a tour guide.  They are locked up otherwise.

Next up, it was tourist time on the trolley. The kids have no ridden both the San Fransisco trolley cars and the New Orleans street cars.  The ride was a nice way to the 19th century houses of the Garden District with two kids who were bit tired of walking and traveling.

After a brief rest at the hotel it was time to get in the car and drive on out to Zephyer Field.  Who plays at Zephyer Field you ask? Why none other than the New Orleans Zephyer’s the farm team for the Mariners.

We, however, were not there to see the Zephyer’s.  Cinco was interested in the visiting team — The Omaha StormChasers.  They are the farm team for the Kansas City Royals, his favorite team. We went to see the Royals in spring training in AZ this spring and now we have seen their farm team.

We met the Zephyer’s mascot which happens to be a RAT! No joke! It makes the Las Vegas 51s Alien look like an fantastic mascot!!!!  Love the ALIEN.

What made the game even better was that both kids go balls from the players.  Sitting behind the dugout has it’s advantages. And, in keeping with the New Orleans Mardi Gras theme the rat threw beads into the crowd.  The kids gathered quite a few because the game attendance was pretty low.