Another must do when in the South is visit a plantation. Less than an hour outside New Orleans are series of plantations on the “Great River Road”.  We only had time to visit one and so we decided to spend our time at the Oak Alley Plantation.  This seemed to be one of the most dramatic examples of antebellum living in the area.

I must admit I did force the kids to watch

before we started the down south adventure.  The film remains an American classic for a number of reason– least of which is the amazing score and the fact it was one of the first full-length feature films.  I know some people take issue with it’s portrayal of slavery and it’s treatment of marriage, but I still like like.  And, even-though I like her, Scarlet is a bit of a nut!!!  Like so many works of historical fiction, IT’S NOT ACCURATE… The Professor who actually teaches Southern Film, is also more than welcome to comment.

Now back to our trip to Oak Alley.  I was surprised to learn that it was NOT a cotton plantation, but rather a sugar plantation.  That makes total sense, since the French did a lot of sugar farming in the Caribbean.  Why wouldn’t they do the same thing in their Louisiana territory?  But, I am too far into the stereotype that all plantations are cotton.

The plantation had an extensive area devoted to the 200+ slaves who worked at Oak Alley over the years.  In addition to replica cabins, Oak Alley told the stories of several of the individual slaves living on the property. 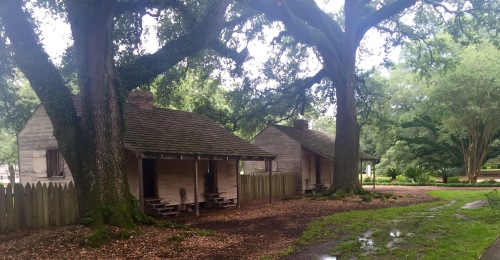 view of the house from the salve quarters

The house itself was built by the slaves, including most of the materials (16 inch bricks for example).

The prime feature of the home are the 28 oak trees lining the walk leading to the “Big House”.  The house actually had 28 pillars to match the number of trees. 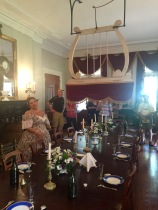 Walking into the dinning room the kids and I had no idea what was hanging over the table.  The guide quickly informed us that it was a large fan.  A slave child about 8 years old would have stood in the corner and pulled a rope to make it move back and forth. 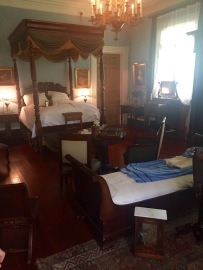 Inside it was decorated to look like the mid-1800s.  All nothing remains of the original furniture.  There are four pieces original to the house all related to the this bedroom.

Anyone who knows me, knows I cannot pass up a chance to stare at a little creature.  The Captain spotted this one as were walking around the plantation’s second story terrace.  The kids were really amazed by this little guys blazing green color.

Everyone also tried a virgin Mint Julep, which was much sweeter than a plan old lemonade. But, it still tasted good on a hot and muggy day.

Oak Alley also featured a civil war tent complete with a southern solider.  Interestingly enough, the Union held the port of New Orleans for most of the war and there was no action at or near Oak Alley. 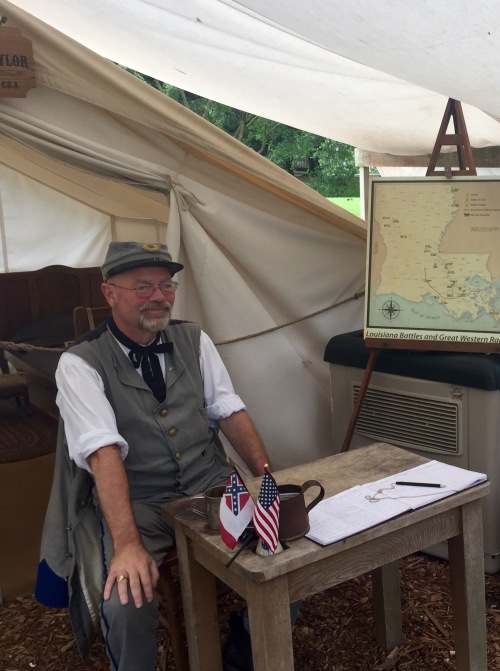