Even the best planning can be undermined by good ol’ public transit. Our third day in London, the Tube’s Green line stopped working and our plans to head off to Hampton Court via Wimbledon were ruined! This sent me running sideways to figure out our next plan.

Going with the flow, we hopped a cab to Southwark to see the new Globe. Meanwhile the kids were holding a hunger strike because they didn’t like any of the British food. Priority number one was finding lunch. Based on their love of breakfast we opted to have breakfast for lunch– which satisfied my wild beasts for the time being.

Sadly, by the time we got to the Globe, the tours for the day were over! Ugh. I however, paid too much for the airplane tickets to be defeated so easily!

Pulling a page from the Harry Potter movies, I took the kids across Millenium Bridge.

Once across the bridge we went to St. Paul’s Cathedral.  I’ve been to England four times before this trip and not once did I ever make it to St. Paul’s.  I am rather surprised I never checked out the dome before.  I love a dome–St. Peter’s in Rome, The US Capitol Building in Washington, DC, Haigia Sophia Dome in Istanbul. 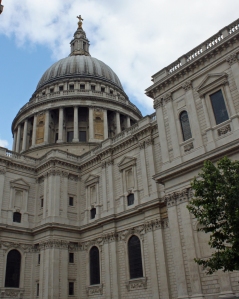 We all went in and headed straight to the Whispering Gallery.  It is located about half-way up the dome and you can whisper on one side of the gallery and be heard on the other side.  I resorted to asking a guard exactly how it worked because we had a little trouble figuring it out on our own.  Once we got if figured it out, the kids really had fun playing with acoustics over an over.

We kept climbing the dome and made it to the first outdoor level.  I tried to get Cinco to climb all the way to the top, but it wasn’t for him.  He stayed on level 2 with Queen Gram and The Princess and I went to the top!  She started to get nervous as the stairs got tighter and higher, but she made it.  Only 5 years old and she made it.  We took a few cute pictures and headed back down to Cinco.

Before we left for England, Cinco and I studied some of the foundation myths of London.  One dated back to the story of Aeneas.  One of his sailors, Brutus, founded the city and this is the foundation stone. It’s in the old city and we walked by after the Cathedral.

Then it was off to bed!