What does mid-summer mean to you? For Cinco and The Princess it means: Fairies, Fairies and more Fairies! 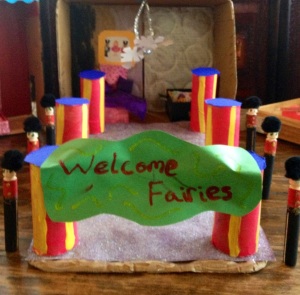 The longest day of the year is traditionally thought of as a night when the fairies come out to make mischief. But, it also includes bonfires, BBQ and eating lots of that favorite summer fruit, Strawberries. For the kids it’s all about the fairies!

They loved making fairy houses for mid-summer last year and insisted on revisiting that activity this year. In fact, The Princess told me to cancel the trip to England if we didn’t do our mid-summer activities! Thankfully, the trip was planned so that we would be home in time to make fairy houses and celebrate the longest day of the year!

This year we spent time making the houses. The kids changed it up a bit. They decided to add a movie theater for the fairies and The Princess even painted a fairy on the movie screen. What’s even better is that The Princess decided it should be an old-fashioned silent movie. (Thanks to Jillian for the cigar box donation!) Another new addition is the grand entrance hall, complete with guards! It is a bit garish, but hey they are kids.

The old stand-by throne room is prominently featured in the fairy compound. Cinco out did himself on the room– red walls and fake wooden floors. Plus, his chair is pretty blinged-out. The Princess also decided some of the important rooms needed chandeliers ~ooh-la-la!

The Princess designed the bedroom as well. I actually found last year’s bed from the queen’s bedroom. The Princess did not want use it again. We reused the pillows and then made a new bed. This year, the king fairy will also have a bed in the queen’s room ~ how racy!

We had a dinning room table last year and cute food. But, I think the table and food presentation have improved over last year! Cinco decided to use beads to make a number of fruits. My favorite were the grapes! 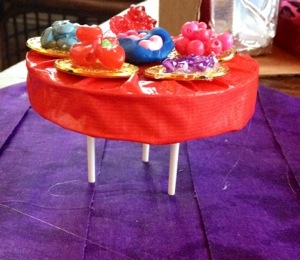 The solstice is also traditionally celebrated with bonfires. Our summer solstice celebrations also included making our own edible fires. If you want to make and eat your own, here’s how:

We also grilled on the BBQ for dinner and had strawberry shortcake for dinner. After we played with a few sparklers to reinforce the fire aspect of the day!