I know, it’s a bit unfair to split one mom camp day into two. But, Stonehenge deserves its own post. 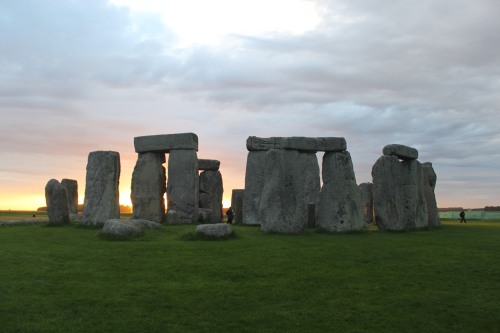 Before getting to the main event, we had a little time to kill and decided to go to the Woodhenge site. Yes, it is lesser known. Yes, it was made of wood– so it has disintegrated. But, archeologists have placed markers where the wood beams would have stood. Stonehenge is not really its own independent site. It is the most striking element of a larger complex that spans thousands of years in its development and use.

I wanted to share that the larger significance of the place with the kids. To some degree Cinco got it! We watched a National Geographic show about the complex and how the subsites might fit together. He really took it in. The theory is that Woodhenge and Stonehenge were part of a day long elaborate ritual of life and death.

Today, Woodhenge is just sitting there in wide open field.  The sheep keep the site company and you must use your imagination to envision life the ancient word.

After getting a little taste of things at Woodhenge it was off to the big time! The last time I was at Stonehenge was in the mid-90’s and at that time, you couldn’t get too close to the stones. Tourists sort of viewed them from afar. While I was researching this trip, I discovered that English Heritage will still allow SMALL groups of people to enter the stones before and after normal visiting hours. It is not prohibitively expensive, but it can be tough to get the tickets. I made our reservations in September 2013. It was completely worth it!

What I did not realize is that the Stonehenge site has JUST been revamped to make it more tourist friendly and you can get near the stones again. Although, you must keep to a path and cannot go into the center of the stones–like we did!

We arrived early enough to take a look at the some of the outside exhibits that English Heritage added to the site. The kids and I attempted to push a replica of one of the colossal stones. 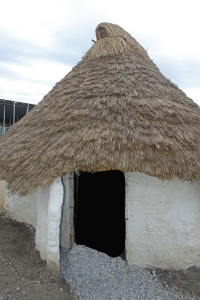 We also toured the roundhouses. At this point our weather luck started to run out…a evening rain began falling on our heads. I tried to get the kids thinking about what it would have been like to live inside one of the houses. The rain added to the idea of roughing it!

Lucky for us, it only rained for a little while once we actually got to the stones!  I took a picture of Cinco at the stones and I have never actually seen him smile so wide!  It was the most amazing, happy mom feeling in the world.  I got the chance to live my own excitement and look at the world through my son’s eyes!  It was the BEST moment of the trip.

We got up close and personal with the stones. We spent time learning how the stones fit together before we left so seeing in person was very exciting for Cinco.

We also got so close to the stones we could see the graffiti that other tourists left behind!

The kids got hold of the camera and went wild snapping pics and telling us where to stand.

We only had one hour inside the stones, but the kids LOVED it and we had a very nice time! It was something special that we will always remember!