This day was ALL over the map!

I’ve been to London several times and never made it to the changing of the guards. The idea of fighting through the crowds to see it simply does not appeal to me! Still, it is so quintessentially British how could I deny the kids the opportunity? Well, I did deny them!

But, I discovered that there is a less well attended ceremony at The Horse Guard. Cinco also wanted to check out the Horse Guard Museum so I figured I could kill two birds with on stone! 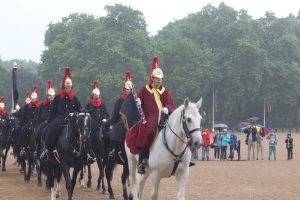 Sadly, it was one of our less than fantastic weather days and we suffered through a rainy start. We saw it pretty close up. But, I think the horses were a little startling for Cinco.

He did love the Museum!  They have a great exhibit where you try on the uniforms of the Horse Guards.  We all took a turn.  Cinco forgot to take off his own shoes before trying on the boots.  He promptly got his foot stuck in the huge boot.  Poor Queen Gram tried like H-E-L-L to pull the boot off.  Then, I got in the act trying to help get the boy out.  He started to cry maybe out of fear and maybe out of pain.  Queen Gram started to panic and actually thought we might need to call someone from the museum to CUT him out of the boot.  OMG!  Thankfully at the last minute Cinco was freed from the boot!   Still both he and The Princess were adorable in the outfits.

Booky Mom at the Horse Guards!

Our next stop was Buckingham Palace by way of St. James Park.  Being a pair of desert rats, the kids loved the chance to stroll through along the pond in the rain.  We spent quite a lot of time with the birds in the park.  (For those you who recall my trip to Belize sans kids with The Captain, we did some bird watching.  And, spent a lot of time making fun of the serious “birders”.  But, I am kinda getting into seeing different types of birds—  does this mean I am getting old?) We also enjoyed some hot chocolates and a huge cookie at the park!

Then we took the typical pictures at the Palace.  It’s another place I have never toured.  I’ve seen if before.  But, I’ve never to London when it was actually open!

You may recall the kids were having a tough time finding food they liked in London.  So we made a stop by Hard Rock Café.  It is the original Hard Rock and was started by two American’s who couldn’t find good food in England!  Perfect for the kids, right?

Next it was off to The British Museum.

We have a great time there.  Cinco loved seeing the remains from Xanthos.  I also enjoyed that because I have been to Xanthos in Turkey!  The ancient city is interesting to see, but everywhere you go there are explanations that all the statues are at the British Museum.

Cinco’s favorite part were the Lewis Chessmen.  He desperately wanted a small replica chess set for sale in the gift shop.  He had spending money from Queen Gram.  But, he had already spent some of it and didn’t have enough for the set.  We planed to go back to the museum when The Captain arrived.  So, I told Cinco if could resist the impulse to spend his money until we returned to the museum, I would make up the difference…

I also very much wanted to look at the Sutton Hoo findings…ON TO ROOM 41.  Cinco and I were in heaven–  Geeks of a Feather!

Queen Gram and The Princess were not excited with The British Museum and kept staring at us from the side line….