There was simply too much to do in only one day of Dinos so we added a second day. After all, who can say no to Dinos.

We started off with several of PBS’ Dinosaur Train episodes that we watched on Netflix.

Then it was time for a little learning. We consulted a number of dinosaur books laying around the

house. The family favorite turned out to be an old 3D T-Rex book. We enjoyed a pseudo dissection of a T-Rex. The book took us about an hour to get through as it had little activities and experiments to do in each section. We measured out 40 feet to understand the scale of the T-Rex. We also conducted balancing exercises to learn how the T-Rex made use of it’s tail. You get the idea.

We took the left over wooden frames from the wooden Dinos we made and used them as stencils. The

kids used all the different body parts in both ‘stencils’ to create their own new dinosaurs and color them in.

Then we embarked on making our own wearable Dino feet, too. Here’s what you need:

Have the kids draw an outline of Dino feet on the cardboard. You can use a show to draw around to make sure the foot dino is large enough to wear.

Step 2: Cut out the feet. Depending on the age and skill of your child, you may want to do this yourself.

Step 3: Cut the paper towel tube length wise. You will glue these onto the feet so the kids can slip on the feet.

Step 4: Let the kids paint the Dino feet. Both kids enjoyed this part and used their creativity.

Step 5: Glue the long strips of paper towel tube onto the feet, making a slip-on for the kids.

Optional Step 6: Glue a few feathers onto the Dino feet. Let the kids choose the placement. I like a few coming off the back, but adding them to the sides or drought is fine too. 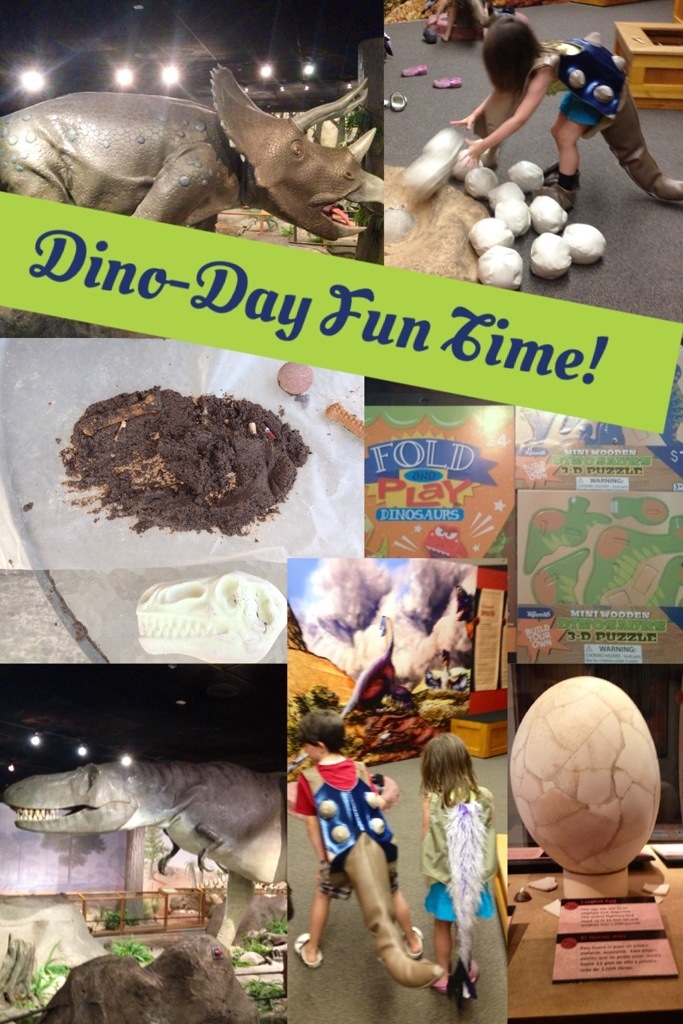 After all the traveling and the days of real camp, Mom Camp is back in business.  The kids actually complained that they have been too busy this summer and that they haven’t gotten enough “TRUE MOM CAMP” days.  To be fair, we have been doing a LOT of other things and our traditional mom camp activities have taken a backseat.

We all agreed on getting back on track with a few days dedicated to our favorite prehistoric pals, Dinos!

We started the day off with some arts and crafts.  Even before school gets out I am on the look out for anything I can use during mom camp.  I got the wooden dino puzzles from the Target dollar section and the fold your own dino kit from Michael’s.

Both sets were easy for Cinco and the Princess to put together and provided plenty of entertainment.  They not only assembled the kits, but then enjoyed some play acting with the toys that they created.

Next, we attempted to make our own dino fossils.  On pinterest I found a recipe using coffee grounds, salt and flour to make a sort of cement.  I was surprised to find I had no flour in the house, so in my typical mom camp way, I substituted pancake mix for flour.  I am not saying that definitely ruined the mix,

but our mix simply did not “pan-out” the way it should have.  It was a shame because we gathered some really fun items to make into fossils.  We were going to use a glow in the dark dino skeleton head and bone-shaped dog treats to make the impressions.

The kids were somewhat disappointed by the failed attempt so it was time to hit our local natural history museum. They have a pretty elaborate room dedicated to large-scale dinosaur models.

Plus, the museum hosts traveling exhibits every few months.  It just so happened we got lucky and the current exhibit was all about dinosaur eggs!  Lucky us.  I didn’t even plan it that way…although the kids thought I did.  Shhhhhh….. don’ tell them.

There were a number actual fossilized eggs on display.  Additionally, there were tons of hands on experiences for the children.  Lots of displays for them to touch so they could get the feel for the texture of the eggs.  They learned that different dinosaurs had eggs with different shapes: some oblong, others more oval, some large, some small.

The Princess and Cinco also had the opportunity dress up in dino costumes.   There were two sets and one of them even had feather on costume, which was fun! They spent quite awhile in that section of the museum laughing and playing at being dinosaurs.

They wiggled the dino tales and played in the dino nests.

We also played a few of the computer games set up at the exhibit.  Cinco and I played dino hangman and The Princess made a series of cute little dino pictures.

All and all a productive day!