This mom camp day was all about going to see the London Dragons and the new Charlie and the Chocolate Factory musical.

In preparation for the trip, I went to the local library and checked out some travel videos. One of them being, Rick Steves’. Cinco watched his tour of London and wanted to see all the places he covered.  I didn’t realize he was ACTUALLY paying attention to the show…

One of the things Rick pointed out were the London Dragons.  They are statues that demarcate the official medieval boundaries of The City.  Historically, it is important because the people of London had special privileges and rights they wrestled away from the kings over the years. Today, it’s not so important.

The London Dragon on Embankment

Still, Cinco wanted to find and photo the dragons.  First, we found the pair of dragons along the Victoria Embankment. But, Cinco also wanted to find the older dragon near temple bar. 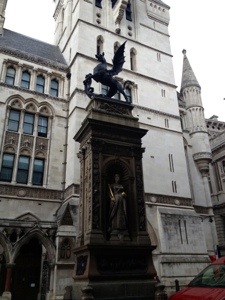 I was running around looking for Temple Church (site of the Marshal’s effigy), not paying one ounce of attention to finding dragons. Low and behold, I look up and there is a dragon! Needless-to-say, Cinco was very pleased with our discovery!

After that we walked over to the West End.

The show was playing at the Theatre Royal on Drury Lane.  There has been a theatre on the spot ever since the mid-1600’s.  Although, the current building dates from the early 1800’s.  Why is this exciting?  Well, before coming to London we read the second Incorrigible Children of Ashton Place book.  In the book, the kids go to the very same theatre to see a silly play called Pirates on Holiday!  Cinco and The Princess were very happy to find out our show was playing there as well!

Queen Gram really did her homework and discovered that some kids do not like being too close to the stage. It seems they use “pyrotechnics”. Let me say this: it’s more like a fog machine than pyrotechnics. Maybe I am jaded coming from Vegas. But, I don’t think the production needed a disclaimer. After speaking to the box office, Queen Gram somehow ended up with seats in the balcony far away from the oh so scary stage. Ugh!

Of course, there were Wonka Bars for sale.  They were huge!  We bought two and shared them.  Again, the kids were in hog heaven.

We attended the matinée along with every school child in London! But, once the show started, everything was fine. The kids liked to show. I thought it was only OK. I am real follower of the original Wonka movie!!! Plus, I love the song Pure Imagination… Childhood memories. The best part of the show was the end when Wonka sang that song! In fact, a few of the school boys seated near us began singing along! It warmed my heart that they were fans of the old song as well!

And, don’t worry Bookymom made Cinco read Dahl’s book while we were in London. As if, I’d let him get way without reading!

After the show it was off to the market at Covent Garden.  This was a challenge for Cinco.  He was saving his money for the Lewis Chessmen set at the British Museum.  However, there were tons of little items to buy, tempting a young heart.  He did well and stayed on track for the Chessmen.