In honor of Jurassic World: Fallen Kingdom’s release earlier this summer, Cinco and The Princess had a few days full of all thing Jurassic Park and World related. 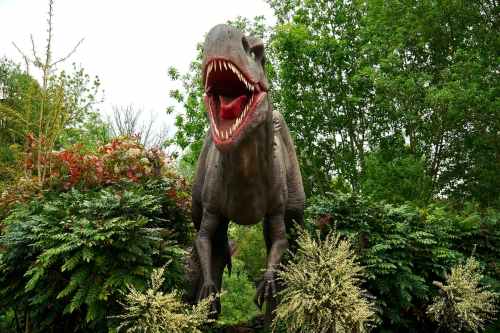 Photo by Mikes Photos on Pexels.com

Over the course of three days we watched all three of the Jurassic Park films AND the first Jurassic World movie.

We also “hatched” our own mini dinos, which I purchase in the Target dollar section.  (NB: The Target dollar section is responsible for at least $200 a year in dumb purchases of junk I do NOT need.)  While at Target we also purchased Cinco the full set of Jurassic World, dino themed, Hot Wheels.  (Because, you know everyone needs a Triceratops shaped Hot Wheel.)

The best part of our Dino Days was Cinco’s idea to make our own Dino themed board game!!!!  Drawing the game board was Cinco’s project while The Princess and I worked on the game board pieces.  Each player chooses a tiny dino egg which she and I hand painted. 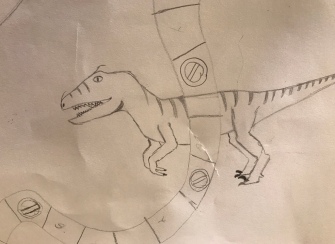 The basic rules are as follows:

As you can imagine, the Danger cards are bad luck, Challenge could go either way, and Lucky Day is, of course, something good.  Here are a few of the cards the kids came up with:

All of us worked on coloring the board and typing the cards.  Then it was time to play…

We recruited The Captain to join us. And, in an intense game I WON!!!!

Pretty sure The Princess earned her games Fun patch! 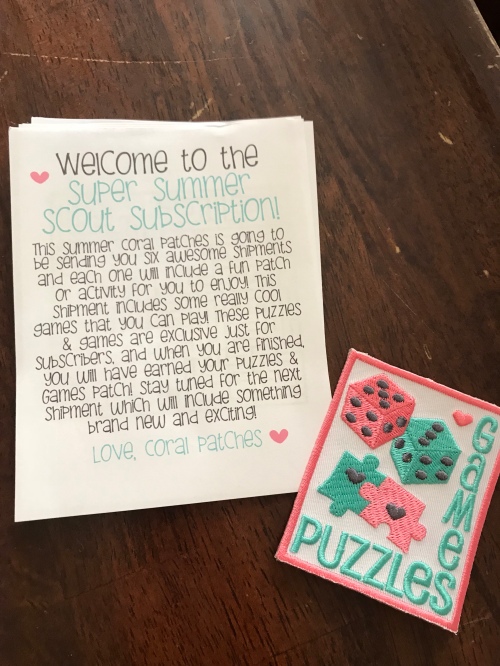 When your sister is at a Girl Scout Camp sleepover and you’re done with band camp, it’s time to head to the hockey rink. I mean it’s 105 degrees so what better way to cool off.

Cinco and I went to catch a development scrimmage for the Las Vegas Knights! In true Mom fashion, I drove straight to CityNational Arena after band camp and of course wound up being about 45 min early for the event. And yes we did get good seats.

As an added bonus, ‘cousin’ Jack Dugan took the ice!

I did have a few flash backs to NHL 2018 Xbox while at the scrimmage. I kept wanting to ‘announce’ the plays and more importantly when a guy almost staked into the goal I felt a LOT better about my Xbox hockey playing skills. As I frequently crash into the goal! So my playing is highly realistic!

After we went for a mother-son dinner.

Okay, okay.  The thing is that Mom Camp has been going on, it’s just that I have been a bit too busy to blog about it.  So, I’d better do some catching up…

On Day 22, we needed to stay close to home because the maid was coming. I had to come up with an idea that would keep the kids engaged all day but not result in a crazy mess or get in the way of the cleaning ladies…hence Board Game Day!

We started out with Clue.

This is a childhood favorite and it turns out that Cinco really likes the game, too. Plus,he won twice!

Next, it was Guess Who.

I did know anything about this game until a few month’s ago when Cinco’s aunt sent it to him. It’s two players and pretty simple. Cinco and The Princess played against each other for several rounds.

Both Cinco and The Princess were able to play the game and get just about every answer correct!

In the afternoon, we hit the pool.

I brought our water proof UNO cards to keep up the game day theme. I was told by Cinco that technically card games did not count as a board game— after all there is no board. Still, I was trying.

After the pool and back at home, I put on Clue The Movie.

You may recall this film from the 80s. It was based on the board game and was filmed and released with three different endings. The audience got to vote on an ending and which ever ending got the most votes was played in the theater. I actually real going to the movie and voting on the ending in my childhood. Sadly, the kids might have been young for the show–even though it is only PG– they couldn’t get into it.

A few Christmas’ ago Jillian gave me Bookopoly (I mean really what else would Bookymom play?) I got it out and we set it up. Each person was supposed to play on their own. We also played the fast version–you randomly deal out the properties (this significantly reduces the playing time!). The Captain had never heard of the quicky version, which I thought was strange.

The Captain and The Princess created an alliance. So of course, Cinco and I had to join forces. This quickly disintegrated into two teams, which is fine because The Princess really isn’t old enough to play on her own. The game was rather competitive. Things went sideways when The Captain got up to get some snacks and Cinco took everyone’s money! The game ended with lots of laughter and tickling. So it was pretty much a perfect game!

Mom Camp Day 14.  It is difficult to believe that Mom Camp has only be going for 14 days.  It feels more like 14 years.  The next few days are all about Star Wars.  Cinco loved Clone Wars and I, being a child of the 70’s, have to stay true to the originals.  (No one in the family is sticking up for Phantom Menace et al.)

Cinco and The Princess in costume for Star Wars Day, Episode I.

Out of the gate we decided to make a Princess Leia headband.  You can find instructions here.

Ours was a little different.  We used a styrofoam ball.  Chopped it in two and glued it on the headband.  Next, it was time to glue on the brown yarn. The Princess (Leia) was very excited to get her headband.  And the best part was throughout the entire process she kept calling me Amidala (because you know she’s Leia’s mom and all).

Next, we made our own Death Stars and some space fighters and even drew a sidewalk chalk Jabba the Hut. I think the PINK Death Star is very original!

We watched the Star Wars: A New Hope!

Then it was time for worksheets.  There is a cute set at Home School Creations.They worked really well for The Princess.

We also took some time to play Mad Libs! I always LOVED Mad Libs as a kid and Cinco and The Princess were laughing like mad… Plus, it’s a great way to work on the parts of speech without the kids realizing that they are learning something!

This was Cinco’s reading for today as well.

Angry Bird Day started fast with a fun cardboard tube craft.  Inspired by Crafts by Amanda we created a few birds of our own.  They are easier to make then they look–and I was working with a four and seven-year old.  If I can do it, you can too!

We even went so far as to design our own versions of Angry Birds and Pigs.  The Princess named her Dazzle, which is perfect!  Plus, I think she’s part of the newest game: Angry Bird-Vegas.  (Just Kidding!)

After all that fun, it was time to clean up so mom had to keep the kiddos occupied with a few worksheets and not so messy games!

For worksheets we turned to:

Quickly, we turned back to the fun and games with a few items I actually broke down and bought!